The technique is known: polygonal models can be constructed by a flattened pattern by folding and glued together, possibly from several separate parts. Almost no swiss school kid could avoid these flat pattern kits of a local medieval building model. 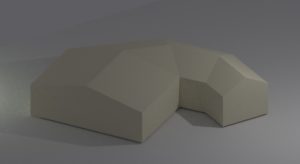 Years later, the swiss kid has run again into these models in the shape of packaging prototypes or case designs. There is various software around to create flat patterns, the paper version typically uses the well known glue flap. The dashed or stroked lines (depending on convexity) are folded, the flaps glued, and put together to a haptic item – under the expense of some patience. 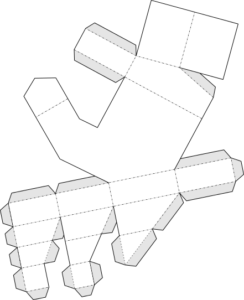 Flat pattern of the simple model with classic glue flaps

With a software tool like the Blender Plugin ‘Export Paper Model’ (starting from v2.79), the above flat pattern can be printed out and cut or scored, to facilitate the folding. That takes some time. Those who own a cutting plotter may accelerate the cutting and scoring process, however the messy action with the glue remains. A new design is not exactly laid out rapidly, and the glueing process may be critical, since glued flaps may still slide during the drying and turn out not to fit with optimum precision.

Could that be achieved more elegantly? We set the goal to construct without glue and be somewhat resistant against the falling-apart of the structure. That means, the seams of the flat pattern are no longer glued, but interlocked – which is definitely in favor of the impatient. The construction is called notch flap. Using this feature, the seams of the above simple house model can be simply locked together, as seen in the image below (the notch flaps are enlarged for visibility). 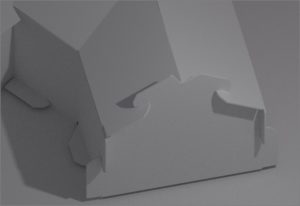 To make the thing work with less bulky flaps, requirements for precision have been raised during the development, meaning, that manual cutting is somewhat out of scope. A simple output to a cutting plotter therefore requires some precision for cutting and scoring below 0.0040 inch. That asks for some extra rules to the output order, as well.

Finally, the process required development of a customized pattern generation and output software (still under optimization), plus some calibration steps and development of customized output routines to the widely available Cameo3 plotter from Graphtec/Silhouette.

The by now optimized output process speeds up our work flow from virtual concept to the real model down to a few minutes up to half an hour (complex objects). Once used to the notch flap folding techniques, the way from the flat cut paper to a final model is in the range of minutes. 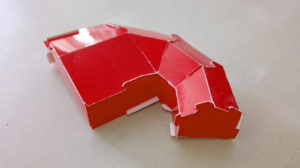 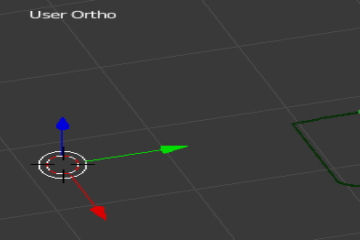 To get an idea beforehand how the object would fold, animations may come in helpful. Using Blenders animation capabilities, we can determine the fold order easily on the virtual object before actually cutting it into Read more…